Currently, the Evansville Parks Foundation, Inc. is working in cooperation with the Department of Parks & Recreation on a long-range renovation plan for historic Garvin Park.
This plan entails several phases to restore and renovate Garvin Park and its large recreational lake to its glorious past. Designated as a historic site on the National Register of Historic Places, Garvin Park also ranks top in usage of all Evansville’s parks, with an estimated 500,000 visitors each year. With Bosse Field, the annual Ritzy’s Fantasy of Lights, the summer recreational swim meets, softball fields, historic bridges & bandstand, playgrounds, fishing lake, and the connection to the Pigeon Creek Greenway, the park offers something for almost everyone. However, the park has faced a series of problems in the past several decades resulting in dire need for lake bank erosion repair, re-forestation efforts, trail restoration, landscaping, and general facility repair/replacement.

In 2003, the Department of Parks & Recreation completed the first phase of these planned renovations, consisting of the installation of a fountain in the lake to improve the circulation of the water, and restoration of the lake dam.

In 2004, the Evansville Parks Foundation voted to pledge $10,000 of the proceeds from the “Evening on the River” event
to the second phase of the planned improvements—a recreational trail encircling the lake, extending into the park, and connecting to the Pigeon Creek Greenway. Representatives of the Foundation worked with Parks Department personnel in applying for an Indiana DNR grant in the amount of $148,000 for this phase, for which the Foundation’s $10,000 will be a portion of the required matching local funds. The grant was awarded in October and plans for the trail’s construction are being finalized for early 2005. 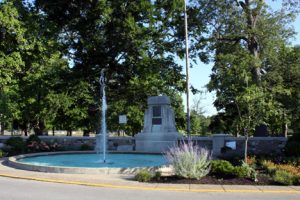 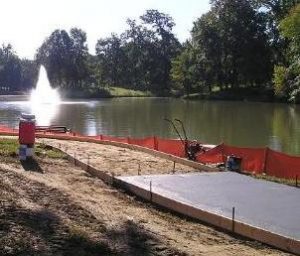